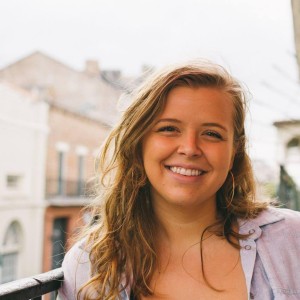 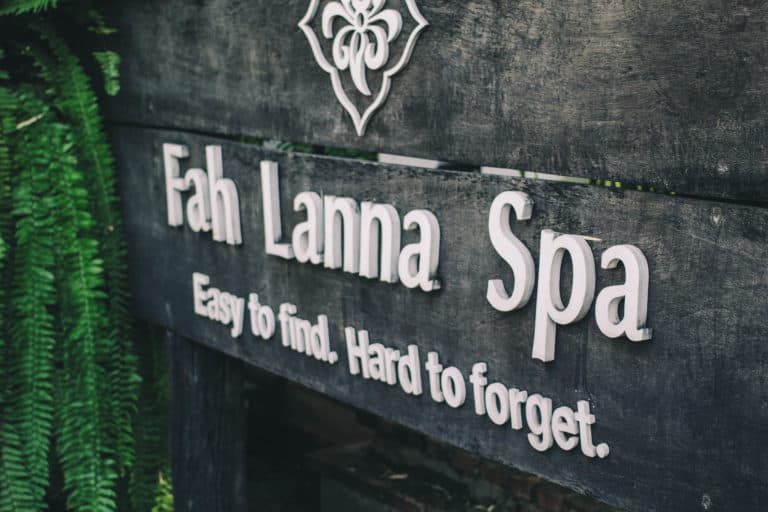 When visiting Fah Lanna Spa – Chiang Mai’s Best Spa – it will quickly become apparent why they have received this title! Fah Lanna is a luxurious, tranquil, oasis in the midst of the Old City in Chiang Mai, Thailand. Fah Lanna offers a one-of-a-kind experience of relaxation, Northern Thailand style!

When we first decided to make our way to Chiang Mai, Thailand it quickly became apparent we would need to go to the spa while we were there. What also became very apparent was the particular spa we should visit – that spa being Fah Lanna Spa. The spa had tons of raving reviews, various awards and was named the best spa in Chiang Mai. Everything about the spa is authentic. From brewing their own ginger and pandan tea for guests, to the lovely scents and ingredients that flow through the spa, you get the spirit of the Lanna people throughout.

We have to mention how reasonable the prices are! A traditional thai massage will run you  500 baht or about $14.58 for an hour. Traditional thai massage is not so much super relaxing, we would say it is more invigorating. Thai massage is an ancient practice developed by Buddhist monks that combines acupressure, Ayurvedic principles and assisted yoga poses. It is a dry massage (no oil) and you will be fully clothed the entire massage. It shouldn’t feel painful – maybe slightly uncomfortable when working out knots, but you will leave feeling amazing!

Fah Lanna offers many services, including more traditional Thai treatments like tok sen – a therapy specific to Chiang Mai, that uses a mallet made of Tamarind wood to knock all over the meridian lines of your body. The vibrations go deep to heal your muscles and body. There are also Thai herbal ball massages- which are designed to relieve pain and inflammation using a heated ball compress filled with herbs to massage the body using gentle, circular motions. In addition, Fah Lanna offers facials, body scrubs, oil massages and even pedicures.

We tried the traditional Thai massage and thoroughly enjoyed the experience. We would recommend trying a massage that is unique to Thailand. It is one of the most authentic experience you can have. 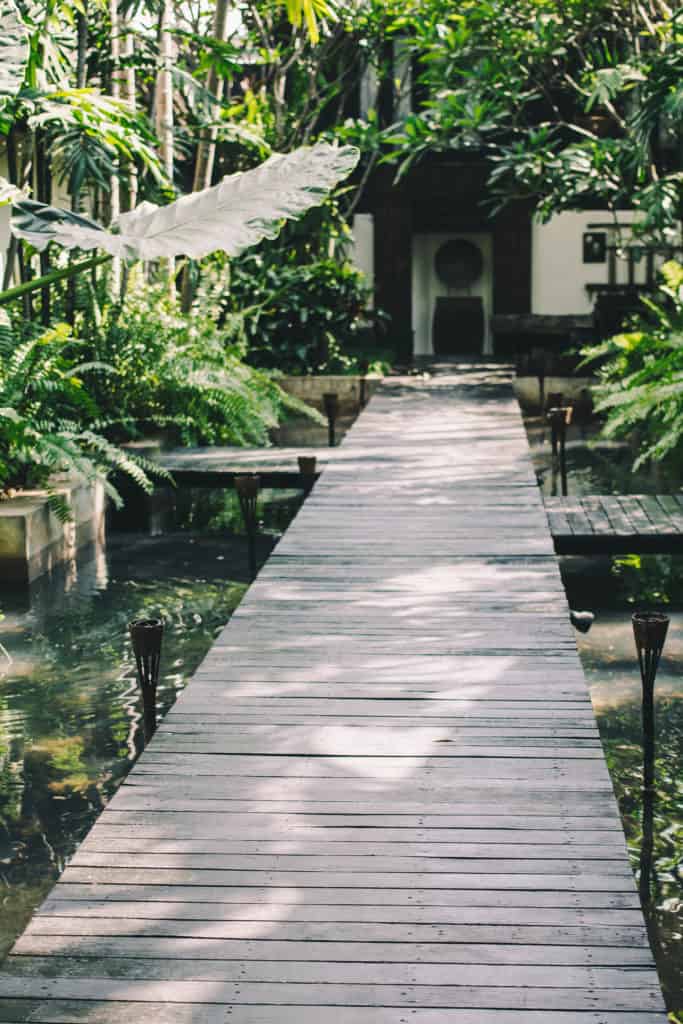 We asked what inspired the owners idea behind the business, their eloquent reply was:

“The owners are regular people that share a dream: As you will see and hopefully feel, the spa was created by feeling. They wanted to create something that is beautiful, inviting, down to earth, welcoming. A place where you feel comfortable and at home. Our philosophy really describes it best: 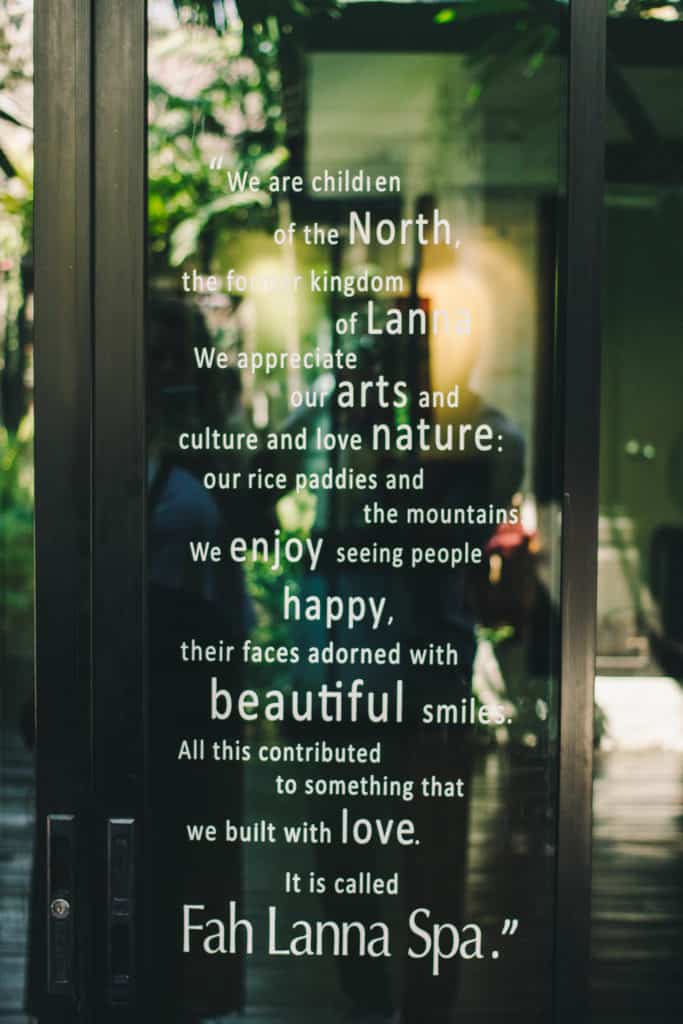 “We are children of the North, the former kingdom of Lanna. We appreciate our arts and culture and we love nature: our rice paddies and the mountains. We enjoy seeing people happy, their faces adorned with beautiful smiles. All this contributed to something that we built with love. It is called Fah Lanna Spa.”

We had Ms. M, the guest relations manager show us around for the day. She was informative and so welcoming. We felt right at home with her as our host! 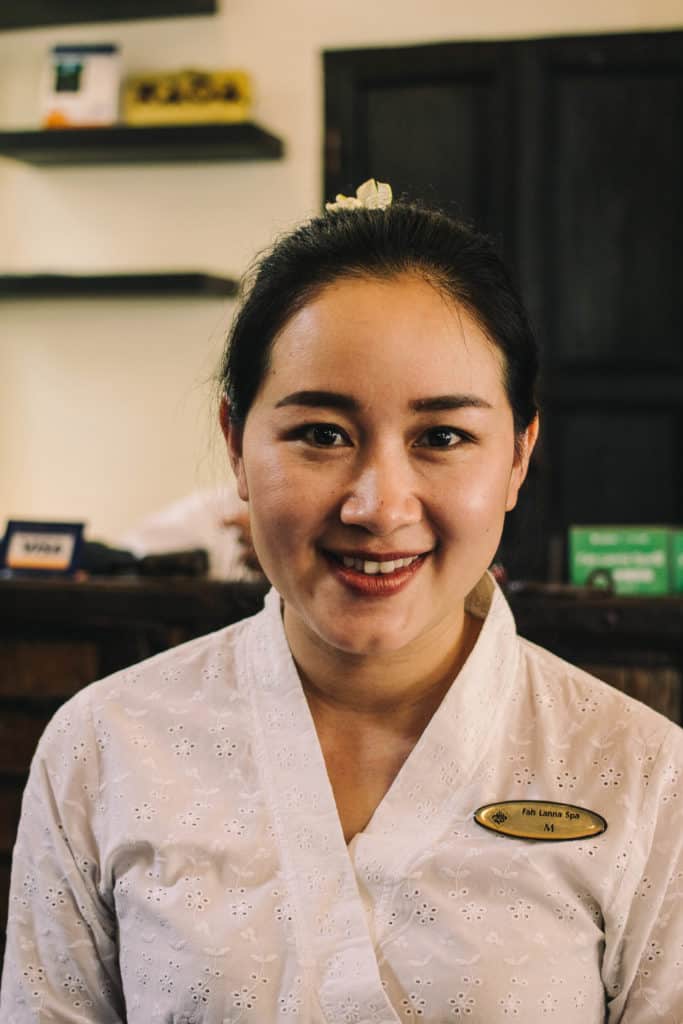 Every guest is welcomed to Fah Lanna spa with a roselle tea drink to cool down the body. Fun fact – the roselle tea is then turned into jam that is put on many menu items. These guys at Fah Lanna are super resourceful. They also source their products locally, supporting the local economy. 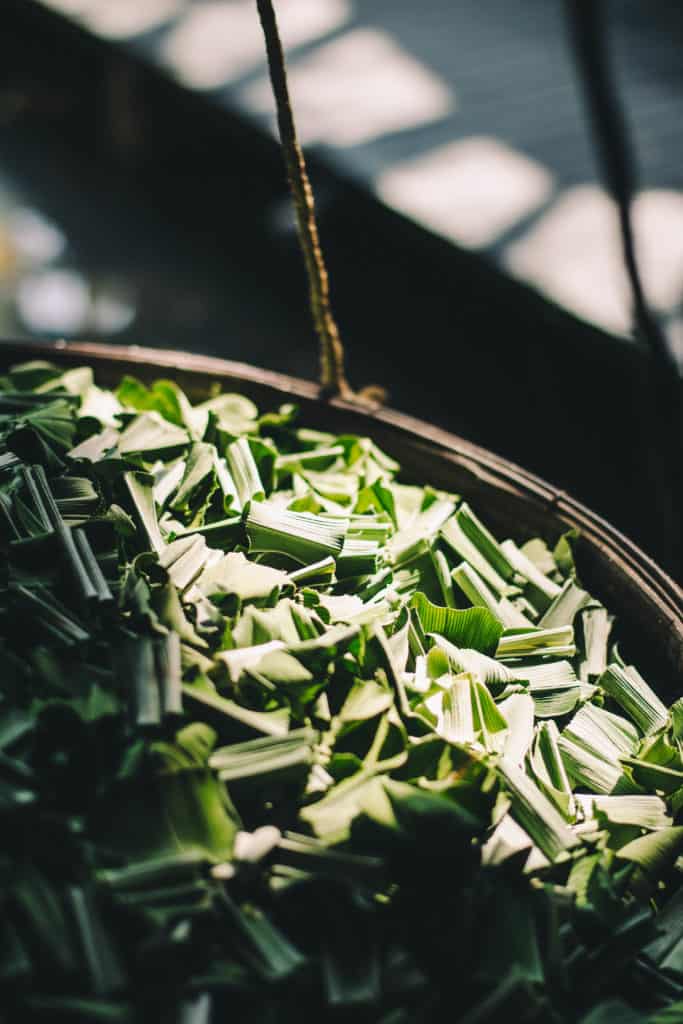 Inside the Treatment Rooms

We were shown around the beautiful spa and all of the different treatment rooms. Each room is named after a nearby village, and is decorated accordingly to reflect what each village is most known for. 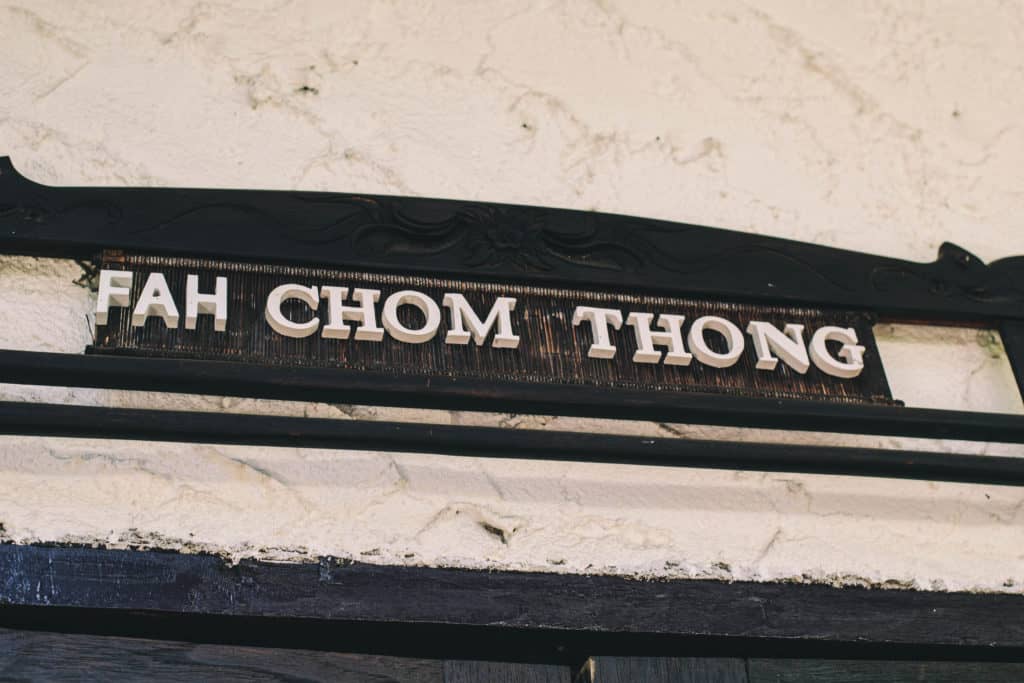 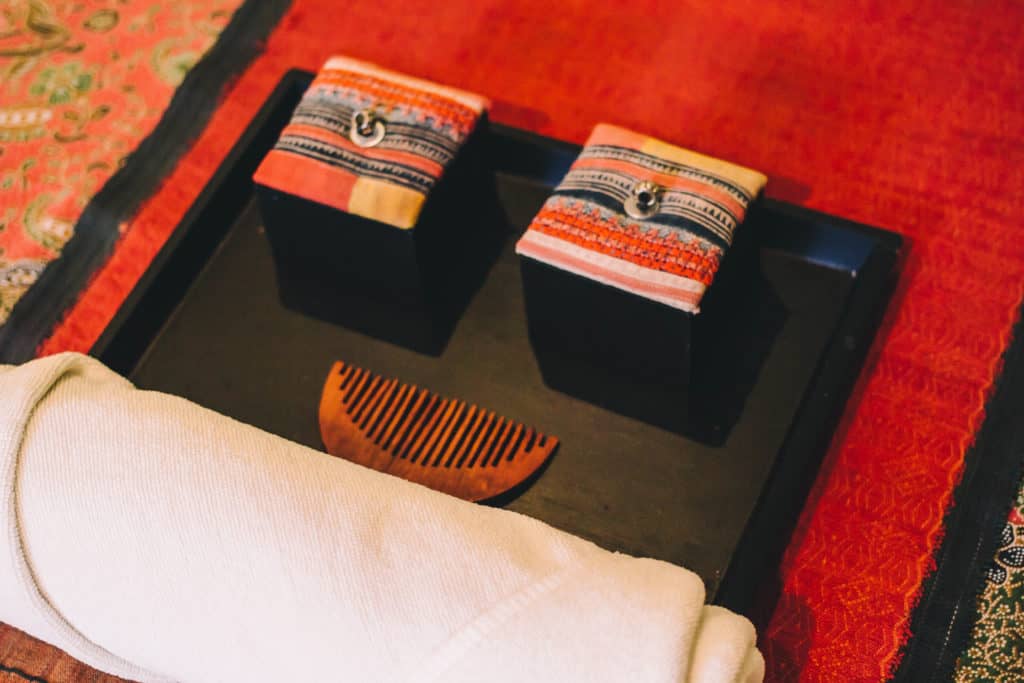 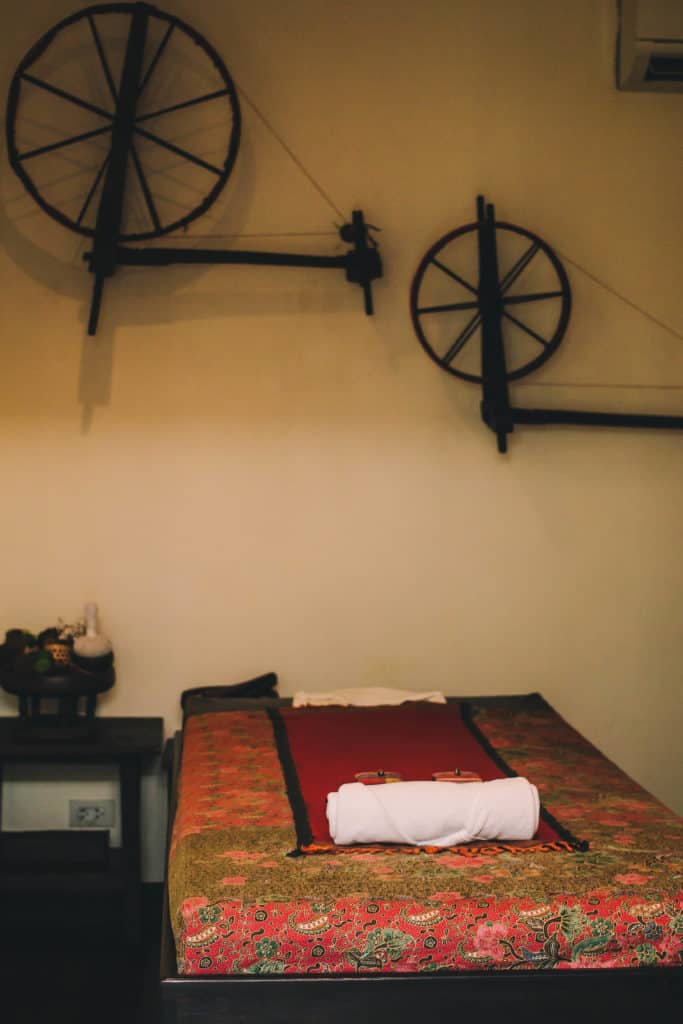 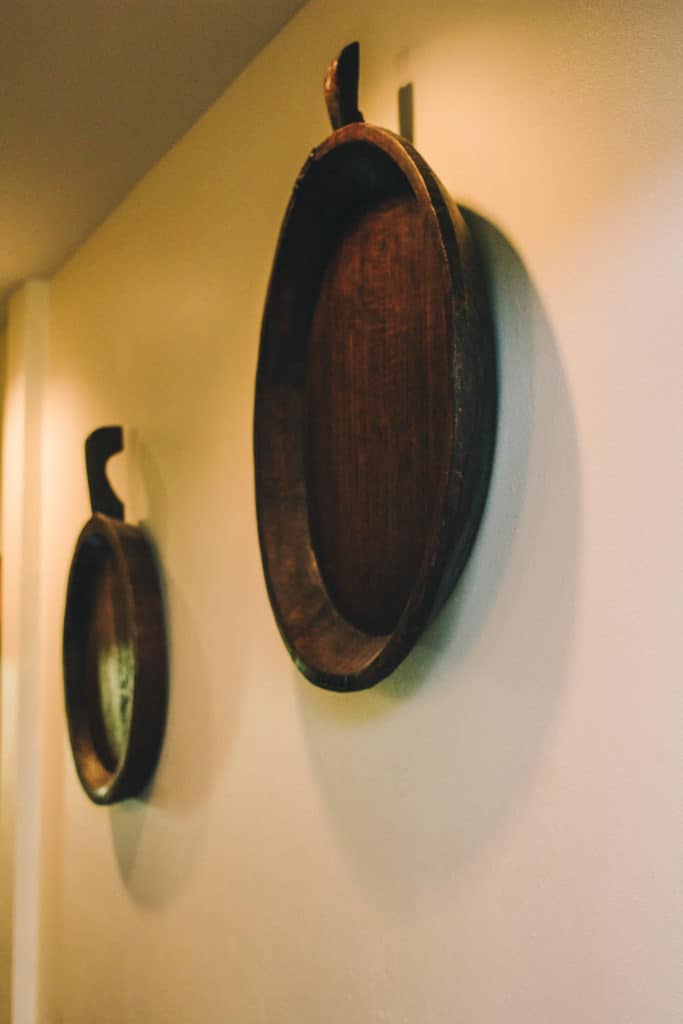 Before the treatment can take place, Ms. M sits with you and has you fill out a card to talk about an injuries you may have, and any place on your body that might need a little more work. You fill out a card like this: 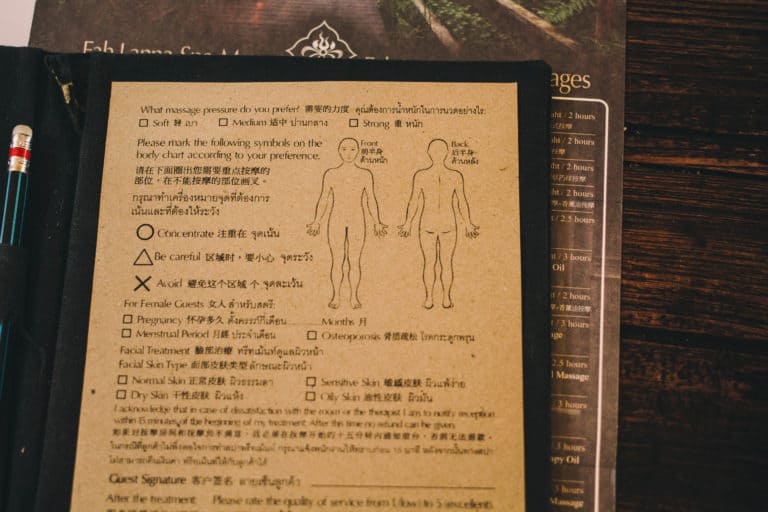 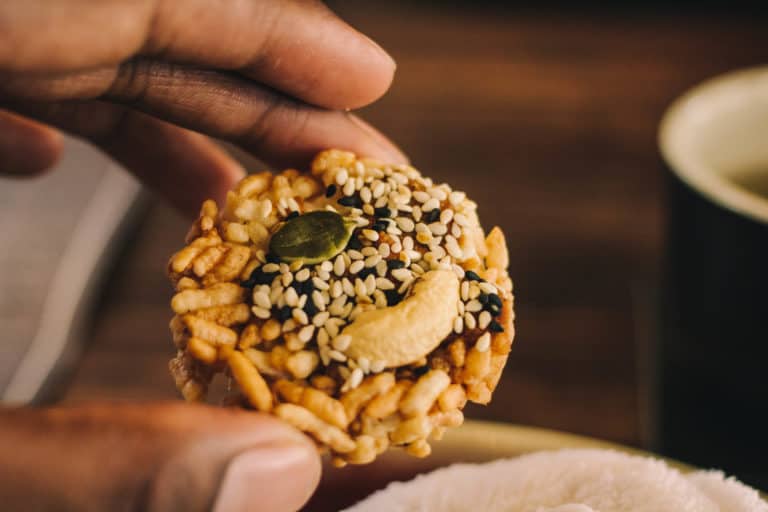 After our rejuvenating and wonderful Thai massages, it was time to kick back and enjoy an absolutely delicious lunch at Fahtara Coffee. 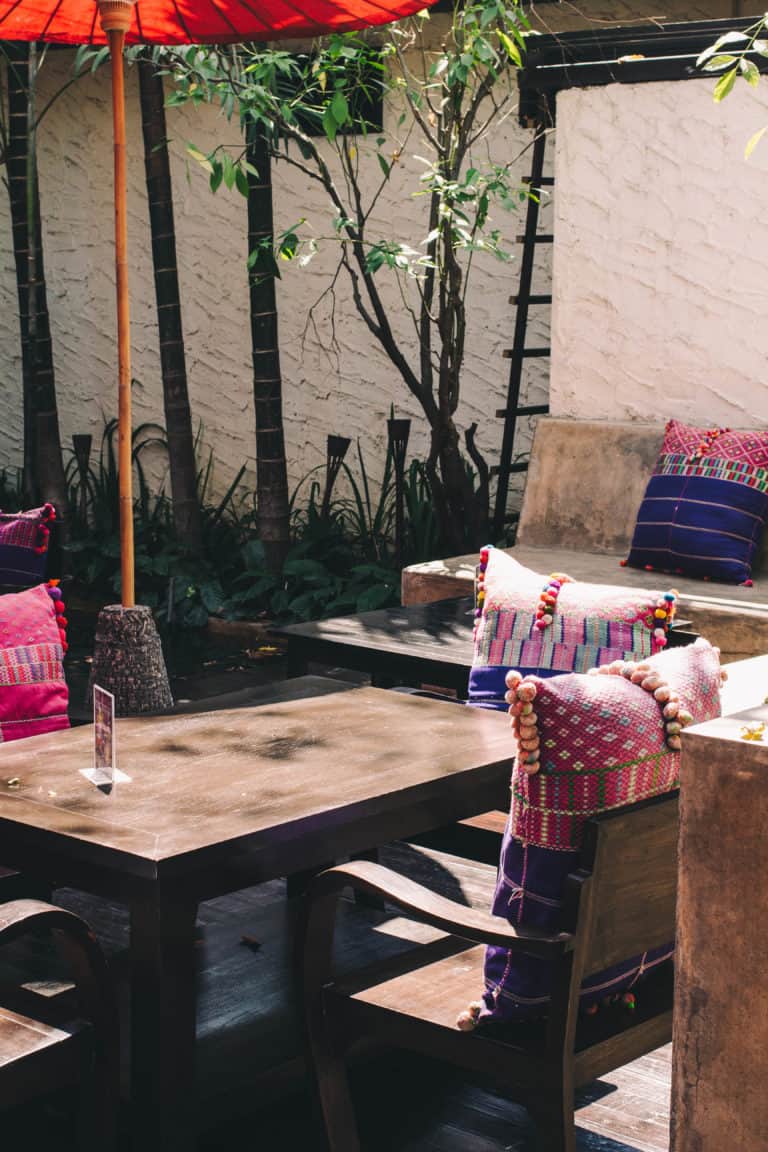 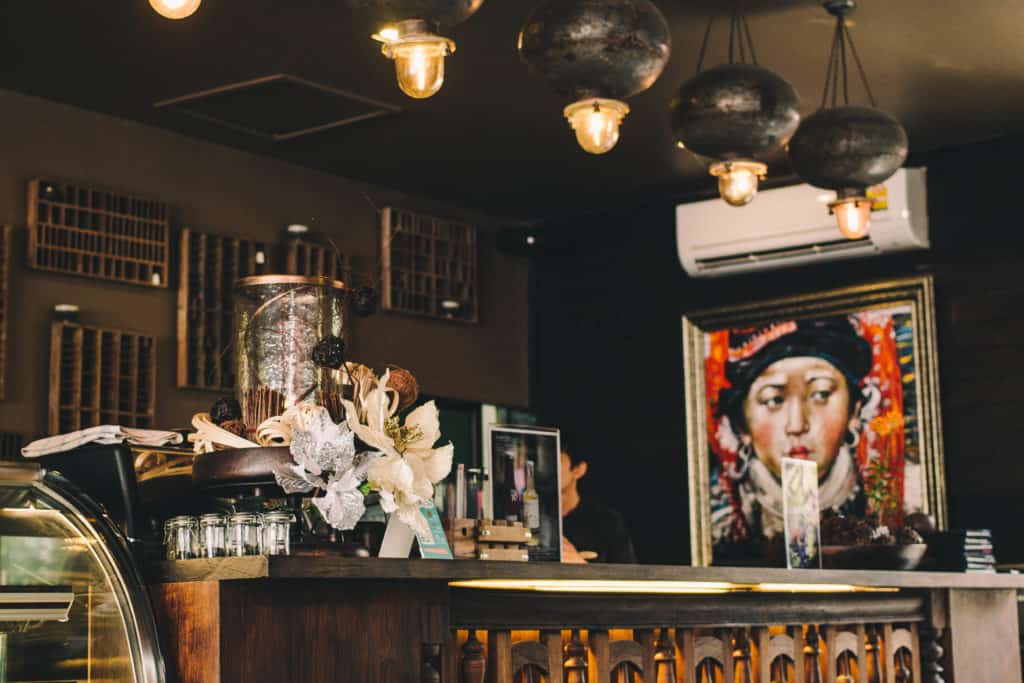 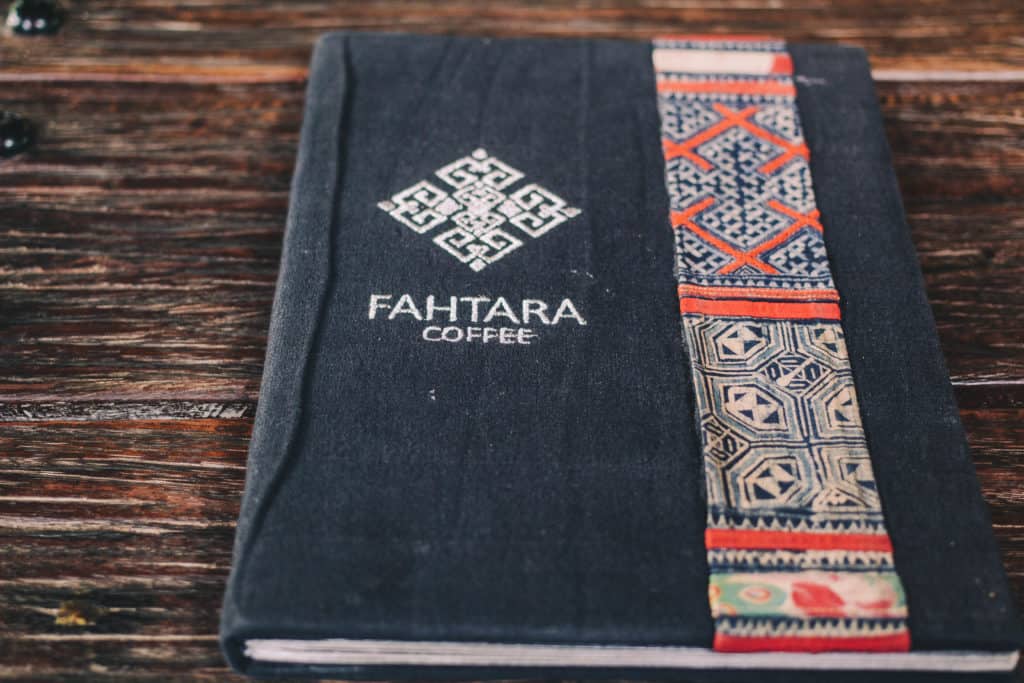 The menu was almost overwhelming with all of the amazing choices. There is delicious Thai food, as well as International dishes, desserts and tons of refreshments. 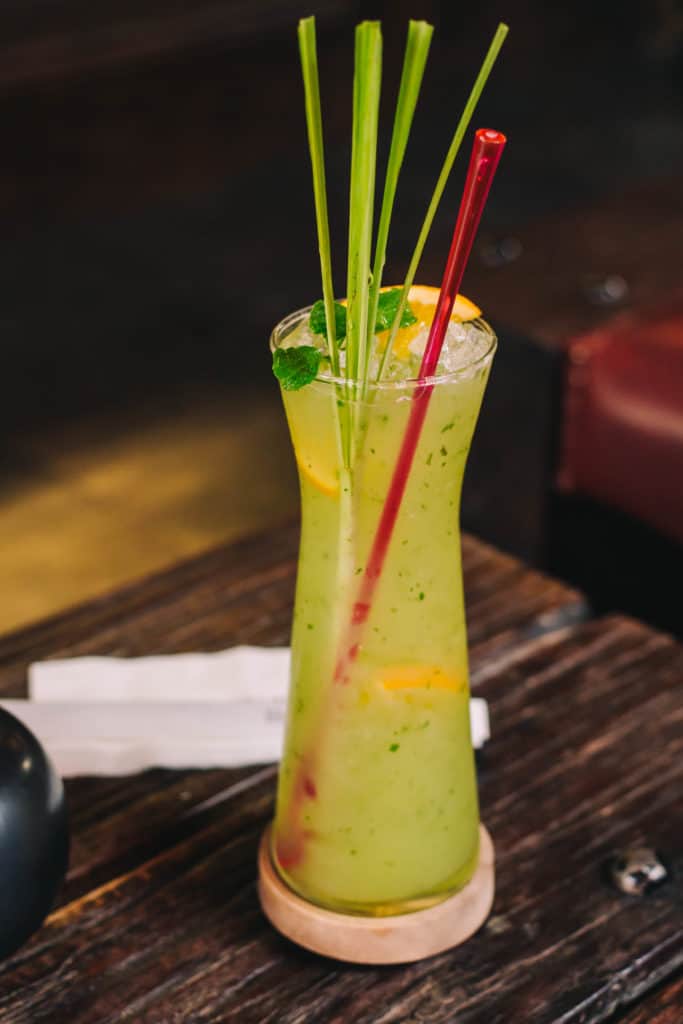 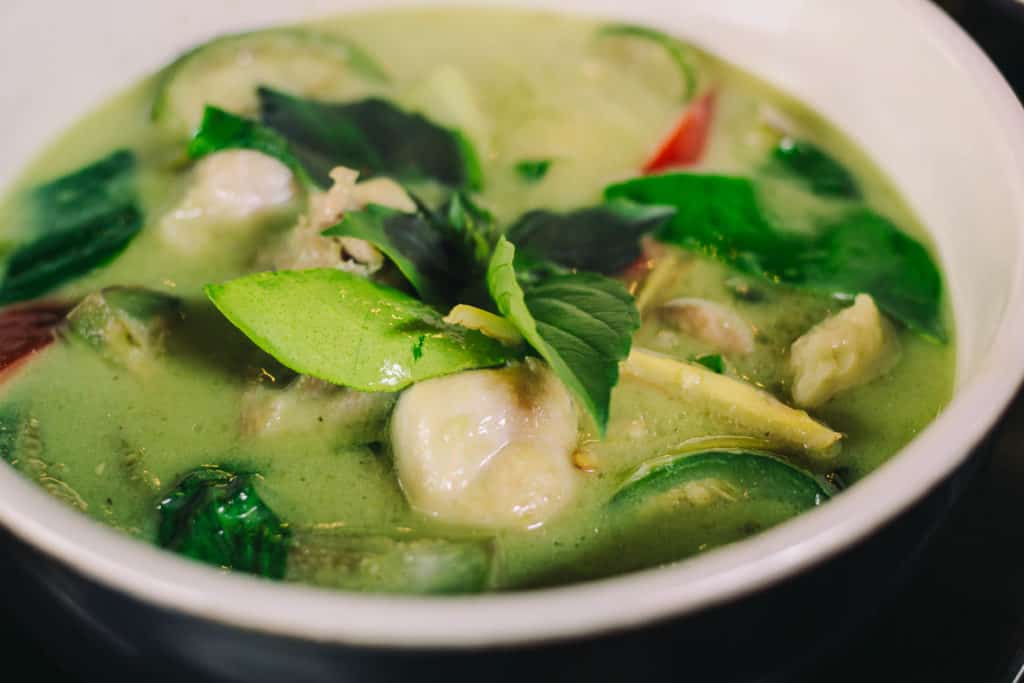 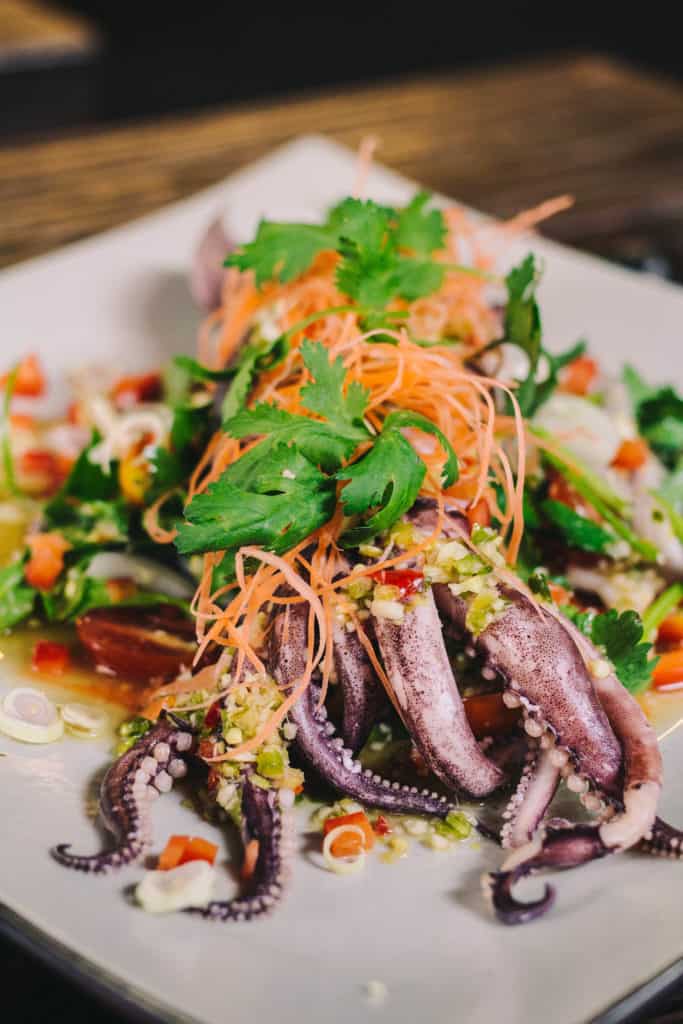 Everything we tried was absolutely fabulous. The chefs here are not fooling around. Dishes are fresh, beautiful and incredibly balanced. You absolutely cannot go wrong! The only thing we wished we would have done different was save room for dessert, and we forgot to get a picture of our red curry with duck!

Some other important things to note about Fah Lanna:

Fah Lanna supports local initiatives, and partners with many local companies that give back, like Build a School Project, Elephant Nature Park & Bring the Elephant Home Foundation, Free the Slaves, Care for Dogs and the Thai Freedom House (supporting refugees). You can read more about their connection to these incredible charitable organizations here. 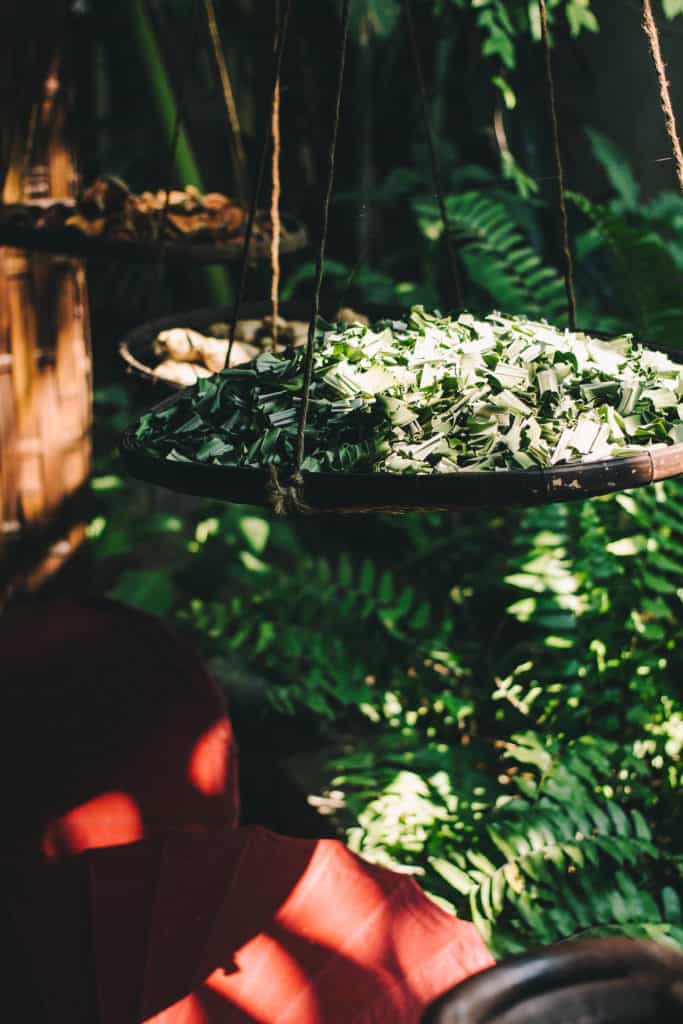 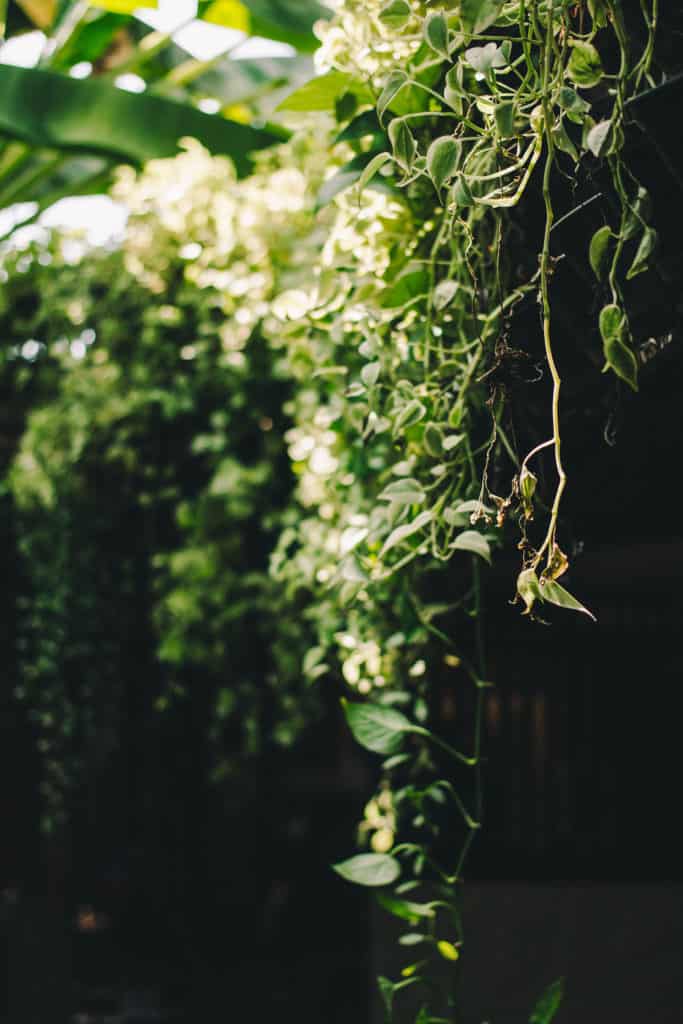 Fah Lanna goes above and beyond to take care of their employees and treat them like family. Many of them have been with the company for a long time, and the owners truly believe in happy employees first, as they feel this will translate to happy customers. The owners even pay for schooling for their employee’s children.

Last but most certainly not least, Fah Lanna is always up for new awards. It’s in the running again this year for best Spa in Northern Thailand 2018. If you’ve been and you’d like to cast your vote, here’s the link! Someone will will a 14 day trip to Thailand! We hope they win, they certainly deserve it. 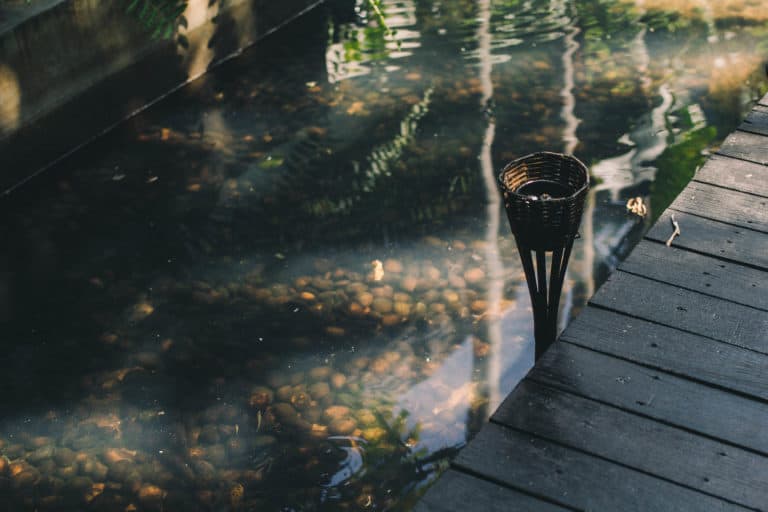 If you make a trip to Fah Lanna or Fahtara Coffee, please send them our love and give us a shout!

Until next time,
Briana & Chamere

Check out this article if you need another idea for how to support the local economy (while hanging out with elephants)! If you need some Thai food inspiration, check out our top picks. Or, if you want to see some really gorgeous street style photos, here’s a link to our Thailand gallery.


Disclosure: We exchanged our spa treatment and meal in exchange for this post. All opinions are our own.

A little sneak peek of what’s to come! If you fi

What do you think @chamereorr is thinking about in

Here we are comin in late with the Super Bowl sugg

We haven’t been doing any traveling lately, but

This site uses Akismet to reduce spam. Learn how your comment data is processed.

Welcome to our journey to create indulgent low carb and keto recipes without sacrificing health or flavor. What started as a change to save our health has turned into the perfect intersection of all of our different passions. Photography, recipe development, eating, and most importantly, helping others enjoy their journey into low carb and keto as well. We hope the pictures draw you in, the delicious recipes make you hungry, and the first bite you take keeps you coming back for more!

Weekly Recipes straight to your inbox! 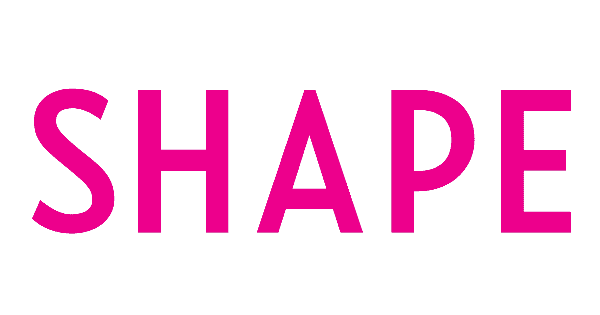 All content and photographs created by A Full Living are copyrighted and protected by law, and you may not download, screenshot, or use photos or content from our website without our permission.
All Rights Reserved.